In this lesson, you’re expected to:
– learn about the conditions required to maintain full employment in an economy
– understand the different types of unemployment
– explore how the distribution of income affects poverty and income equality

The basic goals of the public and private sectors are to achieve both the full employment of resources and a stable price level.

Two major methods exist to track and measure economic performance of a country: unemployment and inflation.

Full employment refers to when the economy is producing at its optimum capacity. It occurs when cyclical unemployment is not present in the economy.

Full employment means that all people above the legal age are employed or are actively seeking employment.

Inflation occurring during a period of full employment is most likely to be demand-pull inflation.

In an economy that is near full-employment, a decrease in the money supply is likely to decrease the price level.

When does Unemployment arise?

Unemployment is defined as the part of the labor force that is without a job and has been seeking employment within the last four weeks.

Unemployment results when either private sector or public sector spending does not measure up to expectations.

[Optional] What Is the Definition of Unemployment?
Read this article to learn more:
https://www.thebalance.com/what-is-unemployment-3306222
Unemployment Rate The extent to which unemployment occurs is usually measured by the unemployment rate. It is derived by simply dividing the number of unemployed people by the total labor force.*

The unemployment rate is a relative indicator independent of country size and thus facilitates cross-country comparisons.

* Labor Force: The labor force is defined simply as the people who are willing and able to work
(Number of Employed + Number of Unemployed).
Increases in Unemployment Rate Does an increase in the unemployment rate mean that fewer people are employed?

Not necessarily. It is possible for the unemployment rate to increase at the same time that the number of employed is increasing.

A demographic shift in the labor force like the entrance of women during World War II or the return to civilian life of members of the military can create a condition where the ratio of unemployed to the labor force increases even while overall employment is increasing.

[Optional] What’s the Unemployment Rate in Your Country?
Check out this link to find out:
http://www.tradingeconomics.com/country-list/unemployment-rate
Types of Unemployment
Not all unemployment is the same.

There are three main types of unemployment that exist in an economy:

1) Frictional Unemployment This form of unemployment will always exist in a dynamic economy. It is short-run unemployment that is caused by people voluntarily changing jobs or due to a lack of knowledge about job opportunities and lack of labor mobility.

There will always be some unemployment at all times caused by workers changing jobs. Frictional unemployment occurs when both jobs and the workers qualified to fill them are available.

Generous unemployment benefits give workers an incentive to spend more time searching for a job and thus increase the rate of frictional unemployment for the country.

2) Structural Unemployment Unemployment that results from an economy’s failure to adjust completely and efficiently to basic structural changes such as changes in technology, consumer preferences etc.

3) Cyclical Unemployment Unemployment that results from in adequate aggregate demand during the recession and depression phases of a business cycle.*
Classification of Unemployment Is it possible for a person to be both frictionally and structurally unemployed?

The classification of unemployment is not an exact science. A person who voluntarily leaves a job to search for another job for which he is unqualified would be both frictionally and structurally unemployed.

In a recession, this person might be frictionally, structurally, and cyclically unemployed.

Other Forms of Unemployment


This occurs when the unemployed choose not to take a job at the going wage rate (e.g. wrong job, benefits too high). They could be counted as unemployed because they are still seeking a job – they just don’t want to take the one they are offered.

3) Disguised Unemployment
This is when people do not have productive full-time employment, but are not counted in the official unemployment statistics.

In pure economic terms, income poverty is when a family’s income fails to meet a federally established threshold that differs across countries. Typically it is measured with respect to families and not the individual, and is adjusted for the number of persons in a family. Economists often seek to identify the families whose economic position falls below some minimally acceptable level. Similarly, the international standard of extreme poverty is set to the possession of less than $1 a day.

Frequently, poverty is defined in either relative or absolute terms.

measures poverty in relation to the amount of money necessary to meet basic needs such as food, clothing, and shelter. The concept of absolute poverty is not concerned with broader quality of life issues or with the overall level of inequality in society. It therefore fails to recognize that individuals have important social and cultural needs.

This, and similar criticisms, led to the development of the concept of relative poverty. Relative poverty defines poverty in relation to the economic status of other members of the society: people are poor if they fall below prevailing standards of living in a given societal context.

Deprivation is the consequence of a lack of income and other resources, which cumulatively can be seen as living in poverty.

The relative deprivation approach to poverty examines the indicators of deprivation, which are then related back to income levels and resources.

Absolute Deprivation It is possible to define the poor as those who lack basic necessities such as adequate food, shelter, healthcare, and education. Of course, this does raise the question of what constitute the basic necessities, and what level of each is considered adequate?

Unfortunately, while absolute standards of poverty are of some use in a domestic context, it is difficult or even impossible to define useful standards when making comparisons on an international scale. This is because the basic necessities of life differ markedly between nations.

Distribution of Income & Income Inequality Income distribution is the equality with which income is dealt out among members of a society.

Income inequality refers to the extent to which income is distributed in an uneven manner among a population. It can also be described as the gap between the rich and everyone else.

The equality or inequality of income in a particular country during an interval of time can be measured by a single number, known as the Gini Coefficient.

What is the Gini Coefficient? The Gini coefficient, named after the Italian statistician Corrado Gini, is a measure of dispersion that is based on the Lorenz curve developed by economist Max Lorenz.

It is a way of comparing how distribution of income in a society compares with a similar society in which everyone earned exactly the same amount. Inequality on the Gini scale is measured between 0, where everybody is equal, and 1, where all the country’s income is earned by a single person.

The Lorenz curve indicates cumulatively how much of the total income of a country is earned by part of the population, grouped by family, starting with families with the lowest incomes. 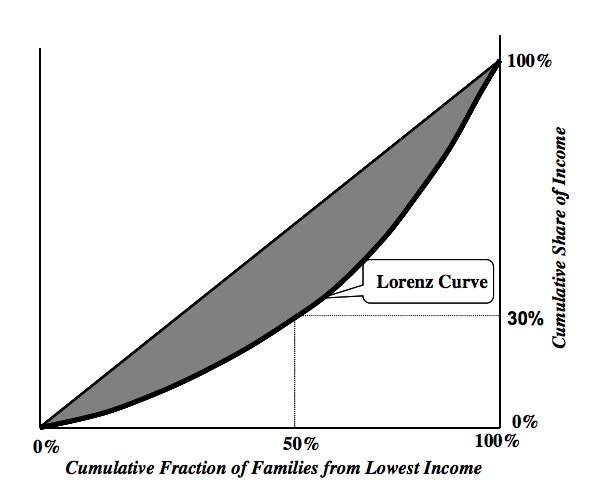