Globalization refers to the shift toward a more integrated and interdependent world economy.

It is a process of interaction and integration among the people, companies, and governments of different nations – a process driven by international trade and investment and aided by technology.

This process has effects on the environment, on culture, on political systems, on economic development and prosperity, and on human physical well-being in societies around the world.

1) Globalization of Markets The globalization of markets refers to the merging of historically distinct and separate national markets into one huge global marketplace. Falling barriers to cross-border trade have made it easier to sell internationally.

It has been argued for some time that the tastes and preferences of consumers in different nations are beginning to converge on some global norm, thereby helping to create a global market. 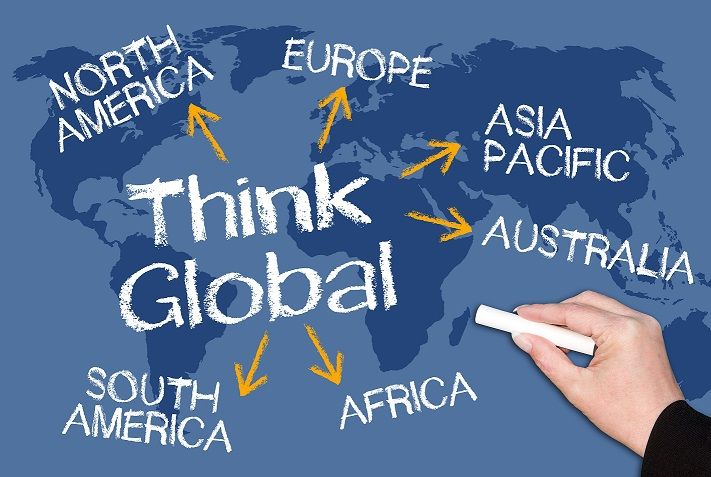 Firms such as these are more than just benefactors of this trend; they are also facilitators of it. By offering the same basic product worldwide, they help to create a global market.

However, as we will see later, significant differences still exist among national markets along many relevant dimensions, including consumer tastes and preferences, distribution channels, culturally embedded value systems, business systems, and legal regulations.

By doing this, companies hope to lower their overall cost structure or improve the quality or functionality of their product offering, thereby allowing them to compete more effectively.

Let’s look at at an example to understand globalization of production.

Consider Boeing’s 777, a commercial jet airliner. Eight Japanese suppliers make parts for the fuselage, doors, and wings; a supplier in Singapore makes the doors for the nose landing gear; three suppliers in Italy manufacture wing flaps; and so on.

Part of Boeing’s rationale for outsourcing so much production to foreign suppliers is that these suppliers are the best in the world at their particular activity.

A global web of suppliers yields a better final product, which enhances the chances of Boeing winning a greater share of total orders for aircraft than its global rival Airbus. Boeing also outsources some production to foreign countries to increase the chance that it will win significant orders from airlines based in that country.

[Optional] Costs and Benefits of Globalization

The first is the decline in barriers to the free flow of goods, services, and capital that has occurred since the end of World War II.

The second factor is technological change, particularly the dramatic developments in recent decades in communication, information processing, and transportation technologies.

During the 1920s and 30s, many of the world’s nation-states erected formidable barriers to international trade and foreign direct investment.

International trade occurs when a firm exports goods or services to consumers in another country.

Many of the barriers to international trade took the form of high tariffs on imports of manufactured goods. The typical aim of such tariffs was to protect domestic industries from foreign competition.

One consequence, however, was retaliatory trade policies, with countries progressively raising trade barriers against each other. Ultimately, this depressed world demand and contributed to the Great Depression of the 1930s.

Having learned from this experience, the advanced industrial nations of the West committed themselves after World War II to removing barriers to the free flow of goods, services, and capital between nations. This goal was enshrined in the General Agreement on Tariffs and Trade (GATT). Under the umbrella of GATT, negotiations among member states worked to lower barriers to the free flow of goods and services.

Evidence also suggests that foreign direct investment is playing an increasing role in the global economy as firms increase their cross-border investments.

2) The Role of Technological Change

The lowering of trade barriers made globalization of markets and production a theoretical possibility. Technological change has made it a tangible reality.

Since the 1940s, the world has seen major advances in communication, information processing, and transportation technology, including the explosive emergence of the internet. Telecommunications has creating a global audience while transportation has created a global village.

Implications for the Globalization of Production

As transportation costs associated with the globalization of production have declined, dispersal of production to geographically separate locations became more economical.

As a result of the technological innovations discussed above, the real costs of information processing and communication have fallen dramatically in the past two decades.

These developments make it possible for a firm to create and then manage a globally dispersed production system, further facilitating the globalization of production. A worldwide communications network has become essential for many international businesses.

For example, due to the tumbling costs of shipping goods by air, roses grown in Ecuador can be cut and two days later sold in New York. This has given rise to an industry in Ecuador that did not exist 20 years ago and now supplies a global market for roses.

In addition, low-cost jet travel has resulted in the mass movement of people between countries. This has reduced the cultural distance between countries and is bringing about some convergence of consumer tastes and preferences. At the same time, global communication networks and global media are creating a worldwide culture.

In any society, the media are primary conveyors of culture; as global media develop, we must expect the evolution of something akin to a global culture. A logical result of this evolution is the emergence of global markets for consumer products. It is now as easy to find a McDonald’s restaurant in Tokyo as it is in New York, to buy an iPhone in Rio as it is in Berlin, and to buy Gap jeans in Paris as it is in San Francisco.

Despite these trends, we must be careful not to overemphasize their importance. While modern communication and transportation technologies are ushering in the “global village”,significant national differences remain in culture, consumer preferences, and business practices. A firm that ignores differences between countries does so at its own peril.

What is an International Business?

As the world shifts toward a truly integrated global economy, more firms, both large and small, are becoming international businesses.

What does this shift toward a global economy mean for managers within an international business?

[Optional] 11 Challenges of International Business in 2017

Read this article to learn more:
http://www.hult.edu/news/international-business-challenges/
Differences between Countries

As their organizations increasingly engage in cross-border trade and investment, managers need to recognize that the task of managing an international business differs from that of managing a purely domestic business in many ways.

At the most fundamental level, the differences arise from the simple fact that countries are different. Countries differ in their cultures, political systems, economic systems, legal systems, and levels of economic development. Despite all the talk about the emerging global village, and the trend toward globalization of markets and production, many of these differences are very significant.

Differences between countries require that an international business vary its practices country by country.

Marketing a product in Brazil may require a different approach from marketing the product in Germany; managing U.S. workers might require different skills than managing Japanese workers; maintaining close relations with the government may be important in Mexico and irrelevant in Great Britain; the business strategy pursued in Canada might not work in South Korea; and so on.

Managers in an international business must not only be sensitive to these differences, but they must also adopt the appropriate policies and strategies for coping with them.

In addition to the problems that arise from the differences between countries, a manager in an international business is confronted with a range of other issues that the manager in a domestic business never confronts.

As we shall see, the choice of entry mode is critical because it has major implications for the long-term health of the firm.

Managing an international business is different from managing a purely domestic business for at least four reasons:

1) Countries are different in several ways.

3) An international business must find ways to work within the limits imposed by government intervention in the international trade and investment system.