In this lesson, you’re expected to learn:
– how globalization affects the development of the top economies in the world
– the concepts of absolute advantage and comparative advantage
– the benefits of free trade and why trade barriers exist

Although fiscal stimulus in major economies, if implemented, may boost global growth above expectations, risks to growth forecasts remain tilted to the downside.

After a lackluster sequence of events in 2016, economic activity is projected to pick up pace in 2017 and 2018, especially in emerging market and developing economies (EMDEs).

However, there is a wide dispersion of possible outcomes around the projections and a certain amount of uncertainty.

[Optional] The World’s Top 10 Economies
Check out this article to learn more:
http://www.investopedia.com/articles/investing/022415/worlds-top-10-economies.asp
What is Globalization? Globalization is a process of interaction and integration among the people, companies, and governments of different nations – a process driven by international trade and investment and aided by technology.

This process has effects on the environment, on culture, on political systems, on economic development and prosperity, and on human physical well-being in societies around the world.

[Optional] These are the ’10 emerging markets of the future’
Check out this article to learn more:
http://www.businessinsider.com/the-10-emerging-markets-of-the-future-2016-7
Free Trade

Adam Smith, in his book The Wealth of Nations, argued that if a country specialized in what it produced best and freely traded those products, then society would be better off. In his view, free trade led to greater wealth, even if it meant that sometimes you imported manufactured goods from other countries.

David Ricardo, on the other hand, argued that it is better for a country to specialize in what it produces at the lowest opportunity cost, and then trade for whatever else it needs.

These two philosophies are the basis of the concepts of Absolute Advantage and Comparative Advantage which we will explore in detail.

Absolute Advantage Absolute advantage refers to the ability of a country to produce a good more efficiently than other countries.

It arises when fewer resources are needed to produce the same amount of goods.

In other words, a country that has an absolute advantage can produce a good with lower marginal cost (fewer materials, cheaper materials, in less time, with fewer workers, with cheaper labor etc.).

However, having an absolute advantage doesn’t necessarily mean that an economy should produce that good. This requires a country to have a comparative advantage.

Assuming that the workers of both economies are paid equally, Economy B has an absolute advantage over Economy A in producing widgets per hour. This is because Economy B can produce twice as many widgets as Economy A with the same number of workers.

Comparative Advantage A country has a comparative advantage when a good can be produced at a lower cost in terms of other goods i.e. at a lower opportunity cost.

Recall that a lower opportunity cost means that it has to forego less of other goods in order to produce it.

Comparative advantage explains how all actors, at all times, can mutually benefit from cooperation and voluntary trade. It is also a foundational principle in the theory of international trade.

Examples of comparative advantage in the real world: Saudi Arabia (oil), Japan (cars) etc.
Let’s use an example to understand the concept of Comparative Advantage. In this example, two countries, the UK and India produce textiles and books.

Therefore India has a comparative advantage in producing textiles because it has a lower opportunity cost.

Therefore, the UK has a comparative advantage in producing books (because it has a lower opportunity cost of 0.25 compared to India’s 0.66).

refers to a country’s decision to specialize in the production of certain goods because of the advantages it possesses in their production.

Since we’ve now established that the UK is better off producing books and India producing textiles, if each country specializes in producing one good, then assuming constant returns to scale*, output will double.

* Constant returns to scale occurs when increasing the number of inputs leads to an equivalent increase in the output.

The table below shows output after specialization.
Output of both goods has increased, illustrating the gains from comparative advantage. The total output is now 4 (Textiles) and 8 (Books), which is higher than the previous totals.

[Optional] What Is Competitive Advantage? 3 Strategies That Work
Check out this article to learn more:
https://www.thebalance.com/what-is-competitive-advantage-3-strategies-that-work-3305828
Arguments Against Free Trade

– Environmentalists are concerned that as countries specialize, production will concentrate in countries that have fewer regulations to protect the environment from pollution and habitat destruction.

– Labor unions oppose it on the grounds that production will shift toward low-wage countries that have little or no union representation.

– Human rights activists oppose free trade as production shifts toward countries where working conditions are often inhumane, and where workers are not afforded the same rights as in industrialized nations.

– Politicians sometimes oppose trade agreements as they argue that decisions are being made by an international body not directly subject to the people.

Trade Barriers Sometimes, countries seek to tax, limit, or even ban international trade. Why do they do this?

Even though voluntary trade is mutually beneficial, the benefits are spread out over society, and the costs are sometimes borne directly by a specific group.

People might have a strong interest in preserving their industry, raising tax revenue, saving the environment, or even creating social change. At times, a country might limit trade in order to punish another country.

Tariffs, quotas, and embargoes are a few of the tools that a country uses in order to accomplish these other interests.

1) Tariffs A tariff is a tax on trade. It can be used to raise revenue for the government or in order to benefit a certain segment of the economy. The government can also be pressured to enact a tariff if your country is subject to foreign competition.

For example, in 2007, India proposed a tariff on rice exports in order to prevent food shortages.

Downsides of Tariffs – Protective tariffs often have the effect of preventing competition and encouraging inefficiency.

– Export tariffs might give producers an incentive not to produce.

[Optional] The Basics Of Tariffs And Trade Barriers
Read this article to learn more:
http://www.investopedia.com/articles/economics/08/tariff-trade-barrier-basics.asp
2) Quotas

Quotas are limits on trade.

Instead of a tax on imports, you might use a quota to limit the number of imported goods coming into your country.

– They do not generate tax revenue for the government, but do create more responsibility.

– They provide an incentive to smuggle goods illegally in order to avoid the quota, thus creating black markets.

– Quotas may be manipulated by foreign firms to limit competition from other foreign firms. For example, if there is a quota on German cars imported into the US, then the German firm that first fills the quota has effectively blocked other German firms from competing in the American market.

3) Embargoes An embargo is a ban on trade with another country. The purpose of an embargo is usually to punish a country for some offense.
Future of Global Economy
The World in 2050 Here are some projections of what the world economy could look like by 2050:
Source: pwc.com
Enlarged version: http://bit.ly/2lHOEnZ 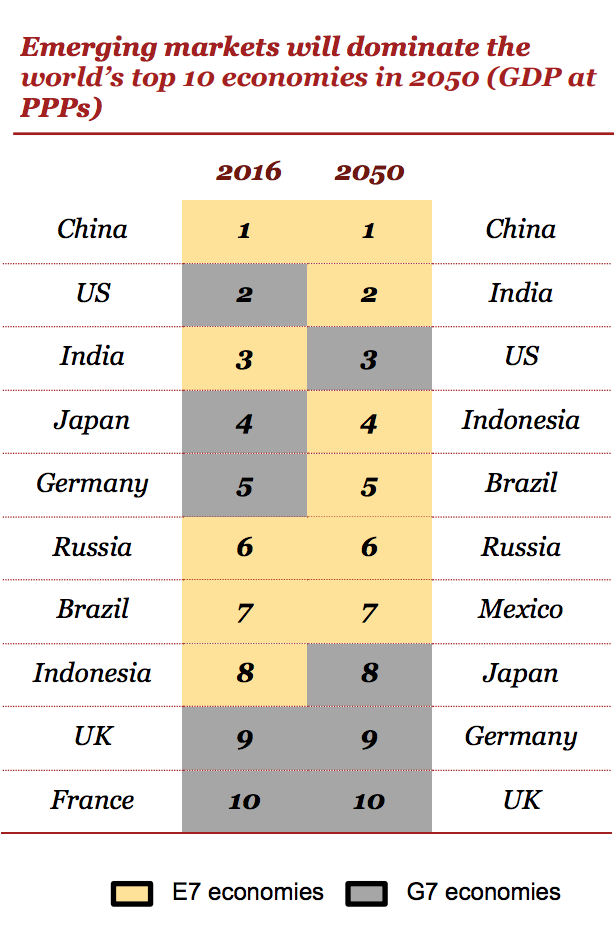 Key Findings of PwC Report • The world economy could more than double in size by 2050 due to continued technology-driven productivity improvements.

• Emerging markets could grow around twice as fast as advanced economies on average.

• As a result, six of the seven largest economies in the world are projected to be emerging economies in 2050 led by China (1st), India (2nd) and Indonesia (4th).

• UK could be down to 10th place by 2050, France out of the top 10 and Italy out of the top 20 as they are overtaken by faster growing emerging economies (Mexico, Turkey and Vietnam respectively).

• But emerging economies need to enhance their institutions and their infrastructure significantly if they are to realize their long-term growth potential.