In this lesson, you’re expected to learn about:
– the difference between substantive and procedural law
– the basics of how the judicial system works in the U.S.
– alternative dispute resolution
What is Substantive Law? Substantive law is the set of laws that creates, defines, and regulates rights and obligations of people within the framework of a single subject, such as contracts, torts*, crimes, or property.

It may be codified in statutes passed by a legislature (Civil law system) or exists through precedents established in previous legal cases (Common law system).

* Tort: a wrongful act or an infringement of a right (other than under contract) leading to legal liability.
What is Procedural Law? Procedural law is the set of operating rules for enforcing substantive law in a court of law, in order to obtain substantive rights or determine substantive obligations.

The rules determine what happens in a criminal lawsuit, as well as civil and administrative proceedings, and are designed to ensure a fair practice and consistent application of due process to all cases that come before a court.

In a legal system, procedural rules are promulgated by the judiciary, adopted after hearings, and published in a code. Procedural law varies from court to court. 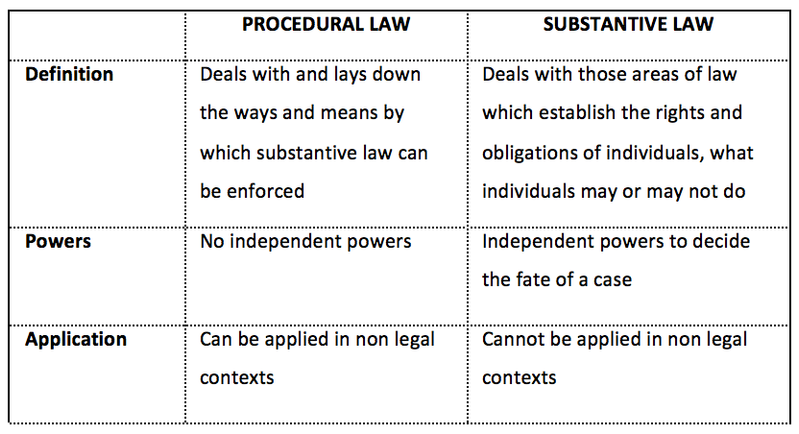 Read this article to see the differences between the two:
http://www.diffen.com/difference/Procedural_Law_vs_Substantive_Law
The US court system
There are two main court systems in the US:  the Federal and the various State systems.

In reference to the structure, the hierarchy of the Federal and State courts are comparable. Therefore, by way of example, we will look at the Federal court system.

1) Federal System • District Courts: these are trial courts and there are 94 district courts with 677 judges altogether. In each of the 50 states, there is at least one federal district court.

In a few cases, a party has the absolute right of appeal – usually the cases involve federal questions, e.g. about the US Constitution and/or a federal statute. According to the US Courts official data, the US Supreme Court hears about 100 to 150 appeals of the more than 7,000 cases it is asked to review every year.

NOTE: the names of the courts may change according to the state and/or circuit where it is located.

Apart from the two main court systems in the US, there are other types of courts such as: 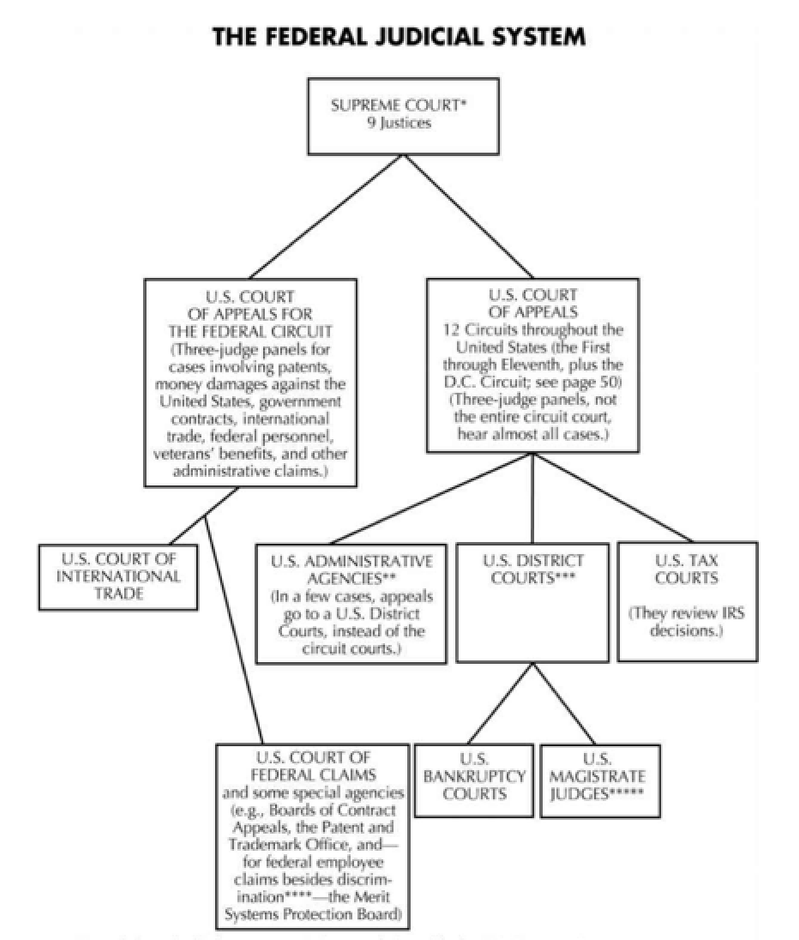 Jurisdiction of the Federal & State Systems Jurisdiction is the power granted to a court system to hear and determine controversies.

It is the power of a court to decide a particular type of case.

– State courts have “general subject-matter jurisdiction” meaning they are usually open to hear any type of case unless it is precluded by the US Constitution, federal statutes, or treaties.

– It is the jurisdiction over a person.

– Requires that the defendant reside or work in the state in which the lawsuit was filed.

NOTE: Sometimes two courts have simultaneous jurisdiction over the same case – this is known as concurrent jurisdiction.
[Optional] Structure of the Court System
Watch this 7-minute video to learn more:
https://www.youtube.com/watch?v=IGyx5UEwgtA&t=3s
Alternative Dispute Resolution (ADR)
The out-of-court procedures for settling disputes In the US, as in most countries, the cost of a lawsuit is very expensive and it may include complaint filing fees, motion filing fees, depositions, experts, appeals (if necessary) etc. independent of the final result.

This is one of the reasons why the vast majority of controversies are settled out of the court.

Other reasons are: confidentiality, fast resolution of the controversy, flexibility of the process, suitability for multi-party disputes, practical solutions, desire to maintain good business and relationship with the other party etc.

The main methods of dispute resolution for businesses controversies are:

1) Negotiation: While the two most common forms of ADR are arbitration and mediation, negotiation is almost always attempted first to resolve a dispute. The main advantage of this form of dispute settlement is that it allows the parties themselves to control the process and the solution.

2) Mediation: Mediators are third-party individuals trained in negotiations who help the opposing parties to settle a case. Mediators cannot impose a settlement on the parties.

3) Arbitration: Unlike mediators, arbitrators have the power to make a final and binding decision.