In this lesson, you’re expected to learn about multiple regression, an extension of simple linear regression. Discover how to perform an analysis when you want to predict the value of a variable based on the value of two or more other variables.

What is Multiple Regression?

Having more than one independent variable introduces some complications into multiple regression analysis.

For example, extra testing must be done to validate the results of a multiple regression model. Interpreting the results also becomes more difficult, and we need to be careful to not include lots of uninformative variables that overfit the model.

In simple linear regression, we described the relationship between the predictor and the response with a straight line.

In the case of multiple linear regression, we extend this idea by fitting a p-dimensional hyperplane for our p predictors.

Thus, we can express our dependent variable as a linear combination of the predictors:

Returning to our example about sales and expenditure in advertising, we usually do not advertise products in just one media but in several media.

What does this mean?
This means that despite the effect of TV advertising being significant when considered alone, it could not be significant when considered together with Radio and newspaper. Its coefficient can also change. It could be that the products with more sales got more advertising on both TV and Radio. Thus, the observed effect for TV was just by chance – it was really the advertising on Radio that got that extra sales for those products.

With multiple variable regression, we are going to be able to quantify the three effects together, TV, Radio and Newspaper.

We are going to express number of sales as a function of those three variables, and quantify its effect together, and determine if the three are significant or some of the variables may not be significant.

The following table shows the summary of the multiple variable regression, where the dependent variable is the number of sales, and the predictors are the expenditure on TV, Radio and Newspaper.
Enlarged version: http://bit.ly/2nxuz3Q 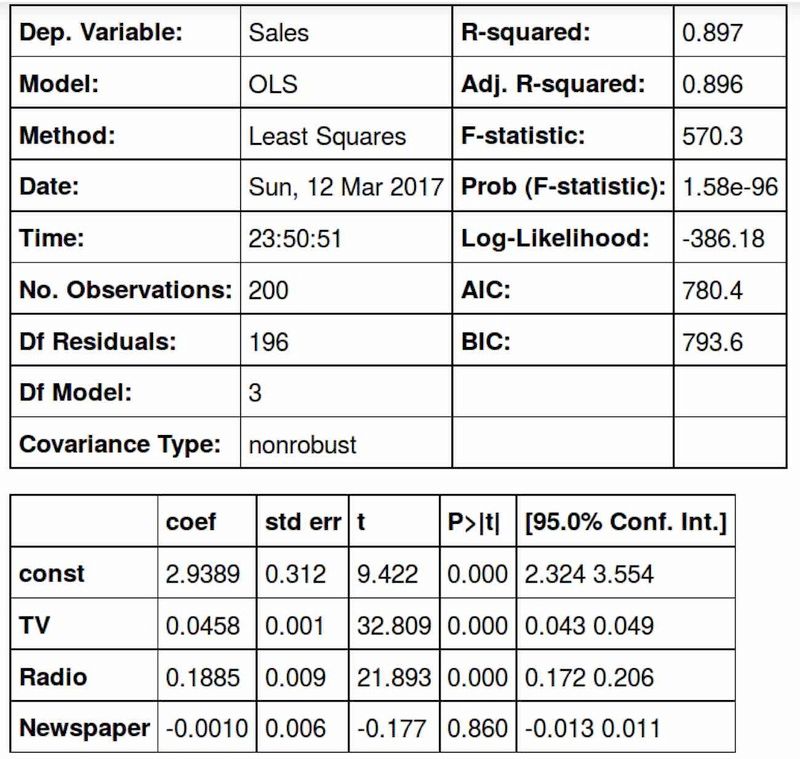 As we did before, we need to check the Coefficient of Determination, or R-squared, which measures the goodness of the adjustment.

For the multivariate model, the value increases to 0.897. This means that the advertising in these three media explains almost 90% of the variance in sales.

What is the adjusted R-square, and why is it needed?

First, every time you add a predictor to a model, the R-squared increases, even if it is just due to chance. It never decreases. Consequently, a model with more terms will have a higher R, simply because it has more terms. In fact if you have N observations, you will always be able to find a linear combination of N random variables whose R-squared is equal to 1. Hence I can’t compare the R-squared of models with different number of predictors.

Thus, when a model has too many predictors and higher order polynomials, it begins to model the random noise in the data. This condition is known as overfitting the model and it produces misleadingly high R-squared values and a lessened ability to make predictions.

With the adjusted R-squared we can compare regression models that contain different numbers of predictors.

Does the four predictor model have a higher R-squared because it’s better? Or is the R-squared higher just because it has more predictors?

Is our overall model significant? Or should we accept the null hypothesis.

The null hypothesis would be that our model is no better than just estimating the number of sales of a product from its mean. To this end, just in the same way as in the simple linear regression, we can rely on the F-test of the model and its associated p-value to answer this question.

Do we have variables in our model that do not have a significant effect on the dependent variable?

Proof that this can be happening is a gap between the R-square and the adjusted R-square.

To further evaluate this issue, and see which variables are not significant, we will need to rely on the coefficients table and evaluate the p-value associated with each parameter.

This means that if you invest an extra $100 in each of the media, you will expect to increase the number of sales in the following way: