In this lesson, you’re expected to:
– understand how money and its use has evolved over time
– learn about the main characteristics, functions and types of money
– explore the role that banks play in an economy

Money is an important feature of virtually every economy. Without money, members of a society must rely on the barter system in order to trade goods and services.

Money is that good which serves directly as a medium of payments.

Money, as we know it today, is the result of a long process.

Initially, there was no money. People engaged in barter, the exchange of merchandise for merchandise, without value equivalence.

Unfortunately, the barter system has a downside in that it requires a double coincidence of wants – in other words, the two parties engaged in a trade must both want what the other is offering.

Stages of the Evolution of Money

Some of the major stages through which money has evolved are as follows:

In the earliest period of human civilization, any commodity that was generally demanded and chosen by common consent was used as money.

Goods like furs, skins, salt, rice, wheat, utensils, weapons etc. were commonly used as money. Such exchange of goods for goods was known as ‘Barter Exchange’.

With the progress of human civilization, commodity money changed into metallic money.

Metals like gold, silver, copper, etc. were used as they could be easily handled and their quantity can be easily ascertained. It was the main form of money throughout the major portion of recorded history.

It was found inconvenient as well as dangerous to carry gold and silver coins from place to place. So, the invention of paper money marked a very important stage in the development of money.

Paper money is regulated and controlled by the Central Bank of a country. At present, a very large part of money consists mainly of currency notes issued by the central bank.

Emergence of credit money took place almost side by side with that of paper money. People keep a part of their cash as deposits with banks, which they can withdraw at their convenience through cheques.

The cheque (known as credit money or bank money), itself, is not money, but it performs the same functions as money.

The latest type of money is plastic money in the form of Credit cards and Debit cards.

They aim at removing the need for carrying cash to make transactions.

• Durable: it needs to last long

• Portable: easy to carry around, convenient, easy to use

• Divisible: it can be broken down into smaller denominations

• Difficult to counterfeit: it can’t easily be copied

• Acceptable: it must be generally accepted by a population

Money allows goods and services to be traded without the need for a barter system. Barter systems rely on there being a double coincidence of wants between the two people involved in an exchange.

In a modern context, in which transactions can be conducted with credit cards, it is better to refer to it as the medium of (final) payments.

This can refer to any asset whose “value” can be used now or in the future i.e. its value can be retrieved at a later date.

This means that people can save now to fund spending at a later date.

This refers to the expressing of the value of a debt i.e. if people borrow today, then they can pay back their loan in the future in a way that is acceptable to the person who made the loan.

There are three main types of money in an economy:
currency, bank deposits and central bank reserves.

A broader classification of the different forms of money would comprise of the following categories:
• Commodity Money
• Commodity-backed / Representative Money
• Fiat Money

[Optional] Types of Money in an Economy
Read this article to learn more:
http://economics.about.com/od/money/a/Types-Of-Money.htm
Role of the Banking System
Liquidity

Cash in your pocket certainly serves as money. But what about checks or credit cards? Are they money, too? Rather than trying to state a single way of measuring money, economists offer broader definitions of money based on liquidity.

Liquidity refers to how quickly a financial asset can be used to buy a good or service. It is a measure of the extent to which a person or organization has cash or assets that can be converted to meet immediate and short-term obligations.

The Role of Banks Banks make it far easier for a complex economy to carry out the range of transactions that occur in goods, labor, and financial capital markets.

Imagine for a moment what the economy would be like if all payments had to be made in cash. When shopping for a large purchase or going on vacation you might need to carry hundreds of dollars in a pocket or purse. Even small businesses would need stockpiles of cash to pay workers and to purchase supplies.

A bank allows people and businesses to store this money in either a checking account or savings account, for example, and then withdraw this money as needed through the use of a direct withdrawal, writing a check, or using a debit card.

Banks are a critical intermediary in what is called the payment system, which helps an economy exchange goods and services for money or other financial assets.

Also, those with extra money that they would like to save can store their money in a bank rather than look for an individual who is willing to borrow it from them and then repay them at a later date. Those who want to borrow money can go directly to a bank rather than trying to find someone to lend them cash.

Transaction costs are the costs associated with finding a lender or a borrower for this money. Thus, banks lower transactions costs and act as financial intermediaries—they bring savers and borrowers together. Along with making transactions much safer and easier, banks also play a key role in the creation of money.
Function of Banks Banks serve a variety of functions in the economy:
• they act as safe places for people to store their wealth.
• they help to facilitate trade by providing alternative methods of payment.
• they bring together savers and borrowers.

Each of these functions is critical to the smooth operation of the economy.

By providing their customers with check-writing privileges, debit cards, credit cards, and cashier’s checks, banks help to facilitate trade. With multiple means of access to stored wealth, consumers are able to make purchases more often and in more places.

Acting as an intermediary between savers and borrowers is probably the most important function of banks.

Banks induce people to save their money by offering to pay interest. These savings are then lent to borrowers at an interest rate higher than paid to savers, allowing the bank to profit.

The saver benefits because he earns interest on a safe and relatively liquid financial investment without having to evaluate whether a potential borrower is a good risk.

The borrower benefits by having access to a large pool of funds which he can use to purchase goods or invest, thus creating jobs and leading to economic growth. 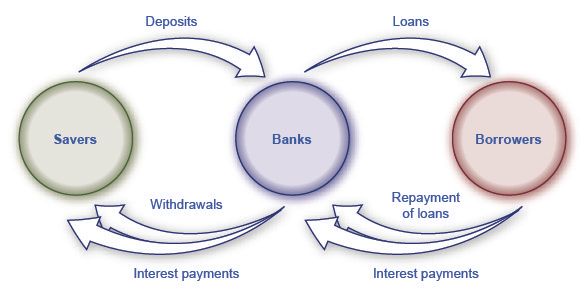