In this lesson, you’re expected to learn the different tools used by banks and governments to influence monetary and fiscal policies in an economy.

Money, loans, and banks are all tied together. Money is deposited in bank accounts, which is then loaned to businesses, individuals, and other banks.

When the interlocking system of money, loans, and banks works well, economic transactions are made smoothly in goods and labor markets and savers are connected with borrowers. If the money and banking system does not operate smoothly, the economy can either fall into recession or suffer prolonged inflation.

The government of every country has public policies that support the system of money, loans, and banking.

Governments use monetary policy as as tool to balance the demand for money with the supply for money, which determines the interest rate.

The goal of monetary policy is to control the supply of money to promote stable employment, prices, and economic growth.

However, since it cannot directly control the economy, there are limits to the power of monetary policy in achieving these objectives.

The organization responsible for conducting monetary policy and ensuring that a nation’s financial system operates smoothly is a country’s central bank.

Some prominent central banks around the world include the European Central Bank, the Bank of England. In the United States, the central bank is called the Federal Reserve—often abbreviated as just “the Fed”.

Money is a good, which, just like other goods, is demanded and supplied by economic agents in the economy. There are a number of determinants of the demand and supply of money.

The most important determinants of money demand are:
– national income
– the price level
– interest rates

The most important determinant of money supply is the behavior of the central bank of a country which is given the power to control supply and bring about changes in it.

The central bank of a country regulates banks and is responsible for monetary policy. It defines money according to its liquidity.

There are two main definitions of money: M1 and M2 money supply.

M1 money supply includes coins and currency in circulation that are not held by the central bank or in bank vaults.

These items together—currency, and checking accounts in banks—make up the definition of money known as M1. Traveler’s checks are also included in M1, but have decreased in use over the recent past.

A broader definition of money, M2 includes everything in M1 but also comprises of other types of deposits.

For example, M2 includes savings deposits in banks, which are bank accounts on which you cannot write a check directly, but from which you can easily withdraw the money at an automatic teller machine or bank. Many banks and other financial institutions also offer a chance to invest in money market funds, where the deposits of many individual investors are pooled together and invested in a safe way, such as short-term government bonds.

Another component of M2 is the relatively small (i.e. less than about $100,000) certificates of deposit (CDs) or time deposits, which are accounts that the depositor has committed to leaving in the bank for a certain period of time, ranging from a few months to a few years, in exchange for a higher interest rate.

In short, all these types of M2 are money that you can withdraw and spend, but which require a greater effort to do so than the items in M1. 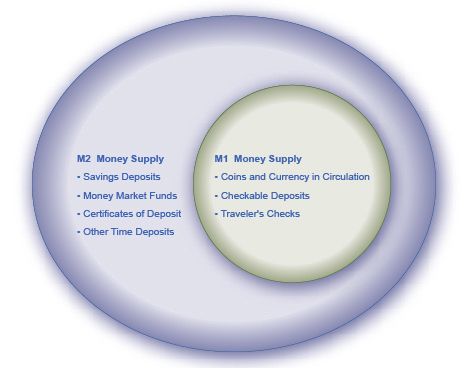 Your demand for money is how much of your wealth you wish to hold as money at any moment in time. It is thus a stock demand, and you must decide how to allocate that stock of wealth between different kinds of assets — for example a house, income-earning securities, a checking account, and cash.

Why would you hold your wealth as money — as cash or checking deposits? Those assets earn little or no interest. Wouldn’t it be more sensible to hold all your wealth in the form of assets that yield income?

1. There is a cost associated with holding money balances (you give up interest payments)

2. There is no intrinsic value in the money balances you hold except in their use as a medium of exchange. Generally, you acquire money in order to get rid of it — to buy things.

Fiscal Policy
Fiscal policy involves the use of government spending, direct and indirect taxation and government borrowing to affect the level and growth of aggregate demand in the economy, output and jobs.

It is a means by which a redistribution of income and wealth can be achieved for example by changing tax rates on different levels of income or wealth.

Fiscal policy is also used to change the pattern of spending on goods and services e.g. spending on health care and scarce resources allocated to renewable energy.

Fiscal stimulus is the increase in government spending or transfers to stimulate economic growth. In most cases, this increase in spending increases the growth rate of public debt with the hope that economic improvements will help fill the gap.

Governments acting to stimulate the economy may also decide to lower tax rates to put more cash in the pockets of businesses and consumers to encourage spending.

The goal of fiscal policy is to adjust government spending and tax rates to promote many of the same goals as monetary policy – a stable and growing economy.

Fiscal policy might take a different approach by reining in government spending and increasing taxes, which can actually hurt business and consumer spending and offset any pro-growth effects.

The is the most widely-used type of fiscal policy as it stimulates economic growth.

How does it work?
The government either spends more, cuts taxes, or does both if it can. The idea is to put more money into consumers’ hands, so they spend more. That jumpstarts demand, which keeps businesses running, and hopefully adds jobs.

Of course, there is a debate about which works better. Advocates of supply-side economics prefer tax cuts. They say it frees up businesses to hire more workers to pursue business ventures.

This type of fiscal policy is rarely used. That’s because its goal is to slow economic growth.

Why would you ever want to do that?
One reason only, and that’s to reduce inflation. That’s because the long-term impact of inflation can damage the standard of living as much as a recession.

The tools of contractionary fiscal policy are used in reverse. Taxes are increased, and spending is cut.

Tools of Fiscal Policy
Fiscal policy is carried out by the government and involves changing:
• Level of taxation
• Level of government spending

To increase demand and economic growth, the government will cut tax and increase spending (leading to a higher budget deficit).

To reduce demand and reduce inflation, the government can increase tax rates and cut spending (leading to a smaller budget deficit).

Policy-makers use fiscal tools to manipulate demand in the economy.

• Government Spending: If inflation is high, the government can reduce its spending thereby removing itself from competing for resources in the market (both goods and services). This is a contractionary policy that would lower prices. Conversely, when there is a recession and aggregate demand is flagging, increased government spending in infrastructure projects would lead to higher demand and employment.

Taxation is required by any government in order to:

Government spending is a means of redistributing income within society – e.g. to reduce the scale of relative poverty

Government spending can also be used as a tool to manage aggregate demand (GDP) as part of macroeconomic policy.