In this lesson, you’re expected to learn about:
– the purpose of mergers & acquisitions
– the three main M&A structures
– variations of mergers

What is the purpose of Mergers & Acquisitions?

Mergers and Acquisitions (“M&A”) is a general term that refers to the consolidation of companies or assets and it includes a number of different transactions, such as mergers, acquisitions, consolidations, tender offers, and purchase of assets.

M&A transactions can allow enterprises to grow, shrink, and change the nature of their business or competitive position. The most common reasons for M&As are:

NOTE: For the purpose of the following lessons, the explanations about M&A will be done from the American Law perspective and more specifically, under the Delaware General Corporation Law.
[Optional] Mergers and Acquisitions

Watch this 8-minute video for an introduction to M&A:
https://www.youtube.com/watch?v=J-t6zD5G4bk
M&A Structures

A merger occurs when two or more companies combine forces to create a new joint entity.

In an acquisition, the buyer or acquirer (“A corporation” or “A”) takes ownership of the stock, equity interests, or assets from the seller or target (“T corporation” or “T”); no new company emerges, rather one of the companies survives and the other ceases to exist.

When choosing the best transaction structure, the companies should take into account factors such as tax, shareholders’ approval, appraisal right of dissenters, regulatory issues, necessity of third-party approval for transfer of contracts etc.

In an M&A transaction, except for specificities of each kind of structure, the general procedure followed is:

The board resolution will approve the M&A agreement that contains the terms and conditions of the deal, the consideration (what is given in exchange), whether or not the T’s shares will be cancelled after the closing of the deal etc.

In a special shareholders’ meeting, they may approve the terms and conditions of the deal. Due notice of the time, place and purpose of the meeting should be mailed to each shareholder at least 20 days prior to the date of the meeting.

3) Appraisal Rights The dissenting stockholders, who’ve voted against the merger or acquisition, have the right to require the purchase of his/her shares at the fair market value to compensate for any loss he/she may have suffered as a result of the transaction.

This right is a protection policy for shareholders, preventing corporations involved in a merger from paying less than the company is worth to the shareholders.

[Optional] M&A Deal Structure
Watch this 5-minute video to learn more:
https://www.youtube.com/watch?v=Kw4cTum_fVo
Mergers
In a merger, the boards of directors of two companies approve their combination to form one legal entity and seek shareholders’ approval.

The quorum* for installation of the shareholder meeting is majority of shares entitled to vote. Majority of all outstanding shares is necessary for the approval of the merger. The dissenting shareholders, who have voted against the deal, have appraisal rights.

* Quorum: the minimum number of members that must be present at meetings to make the proceedings of that meeting valid.
After the merger, the T corporation is consumed, its shares are cancelled, and it becomes part of the acquiring company. As a consequence, the A corporation assumes all assets, rights, and liabilities of the extinguished company.

Before vs. After a Merger 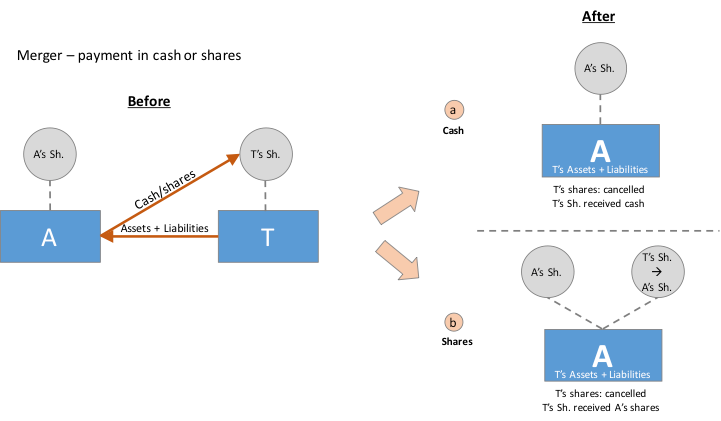 Variations of a Merger Some of the structures for the merging of companies are:

The basic form of a merger. A merger in which one of the merging companies continues to exist as a legal entity, rather than being replaced by the new entity. 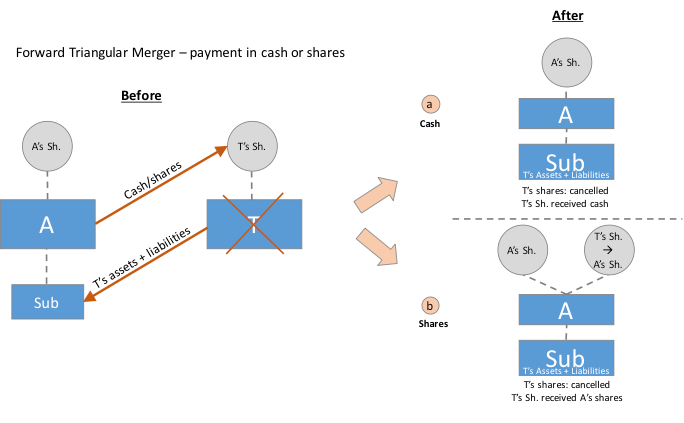 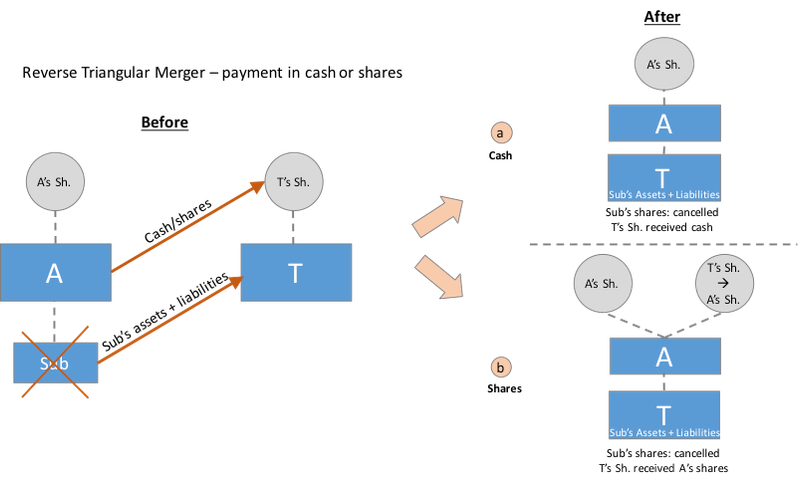 Usually, the T corporation is an operating company that owns certain goodwill – name, brand, customer base, intellectual property etc. –  that are expected to survive after the deal. There is no risk to A’s contracts, as T corporation becomes a subsidiary of A and thus there is no change of the ownership of contracts.

The merger allows A to acquire the rest of T’s stocks without A shareholders’ approval. The T corporation becomes a wholly-owned subsidiary and its shareholders will have appraisal rights.

The short-form merger is usually the second step of a merger: a tender offer (1st step) followed by a short-form merger (2nd step) concludes the deal. Usually, both the 1st and the 2nd step have the same price paid per share. 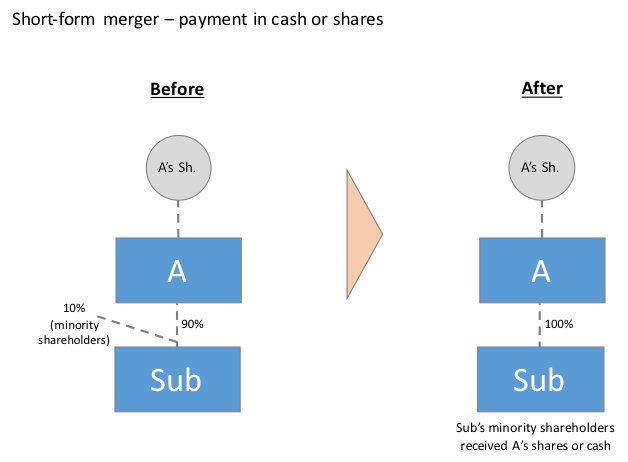