In this lesson, you’re expected to learn:
– the basics of legal systems
– the difference between civil, common, and religious law
– how legal systems differ across countries
What is a legal system?
A legal system is the set of laws of a country and the ways in which they are interpreted and enforced. It must uphold fairnessin society – both for business and for individuals.

There are several legal systems in the world and dealing with many different types can be difficult and confusing. Taking into account the impact of various aspects of legal systems in international business, it is very important for business people to have a good understanding of legal systems of countries that they do business with.

Religious vs. Secular Legal Systems
Despite the great variety of legal systems in the world, it is relevant to emphasize one great division – that into religious and secular legal systems. Each side of this split holds quite different views as to law in its source, scope, sanctions, and function.

Both Civil (also known as Continental European) and Common law systems can be considered the most widespread in the world.

NOTE: some transnational entities such as the European Union (EU) have created their own legal structures.
1) Civil Law
The Codified System

A civil law system is a codified system of law in which its central source is written codifications such as constitutions, statutes which are adopted through the legislative process, and regulations that are promulgated by the executive branch.

While the concept of codification dates back to the Code of Hammurabi in Babylon ca. 1790 BC, it takes its origins from Roman Law.

Features of a Civil Law System

• In general, only legislative enactments and administrative regulations are considered binding for all. There is little scope for judge-made law in civil, criminal and commercial courts, although in practice judges tend to follow previous judicial decisions.

• Less freedom of contract – many provisions are implied into a contract by law and parties cannot contract out of certain provisions.

• The judge often brings the formal charges, investigates the matter, and decides on the case. He or she works within a framework established by a comprehensive, codified set of laws.

• It is generally more prescriptive than a common law system.

Who follows a Civil Law System?

Countries following a Civil Law System are mostly Central and Eastern European, East Asian, and countries that were former French, Dutch, German, Spanish or Portuguese colonies or protectorates*, including much of Central and South America.

* Protectorate: a state that is controlled and protected by another.
2) Common Law
The Uncodified System

A Common Law System is generally uncodified and its central source is the judicial decisions, called precedents, that have already been made in similar cases.
Features of a Common Law System • There is not always a written constitution nor any compilation of legal rules and statutes.

• Judicial decisions are binding – decisions of the highest court can generally only be overturned by that same court or through legislation.

• Extensive freedom of contract – few provisions are implied into the contract by law.

• Generally, everything is permitted that is not expressly prohibited by law.

• The judge moderates a contest between two opposing parties. A jury of ordinary people without legal training decides on the facts of the case. The judge then determines the appropriate sentence based on the jury’s verdict.

• It is less prescriptive than a civil law system.

Who follows a Common Law System?

Countries following a Common Law System are mostly in the United Kingdom and the ones that were former British colonies or protectorates, including the United States, Canada, India, and Australia.

NOTE: In the European Union, the Court of Justice takes an approach mixing civil law (based on the treaties) and common law (with an attachment to the importance of case law).
Civil Law vs. Common Law
Enlarged version: http://bit.ly/2oxLgIP. Source: adapted from World Bank 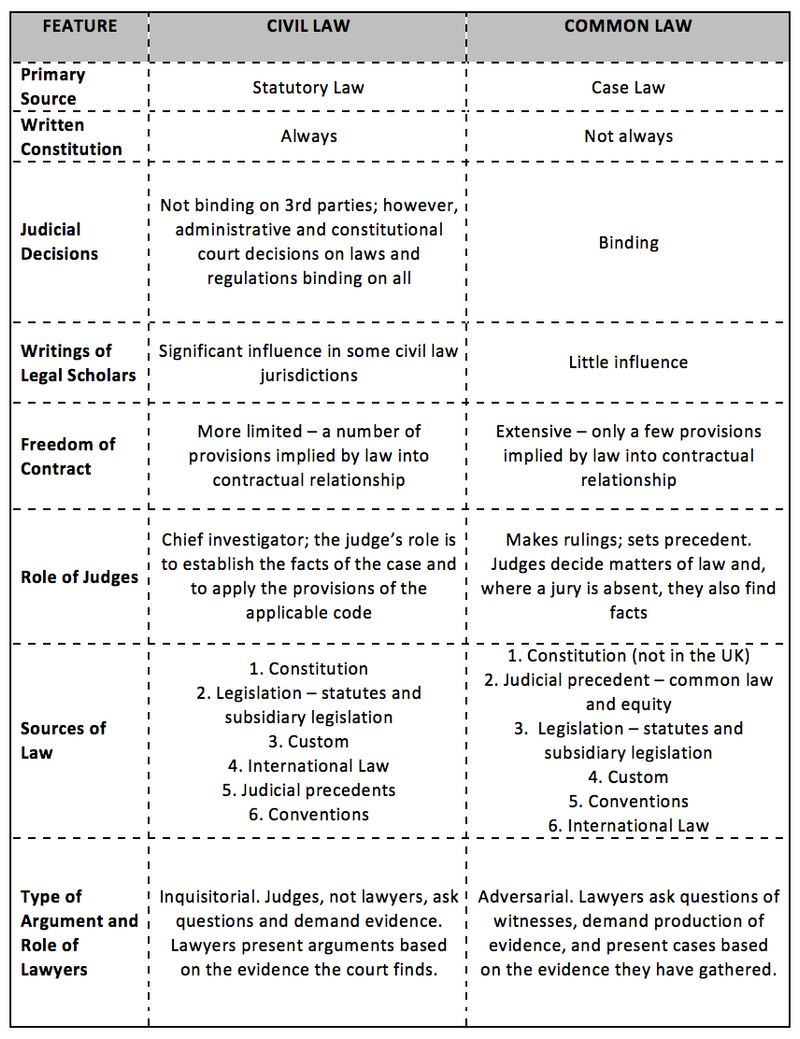 Religion and law have always been interrelated. In the past, religion wholly controlled the law; today law controls the scope and sphere of religion in major parts of the world.

Some important features of Muslim Law are:
• deterrent punishment which is the basis of the Islamic criminal system;
• different rules for men and women;
• influence of the Islamic religion on the rules (oneness of church and state);
• regulation of public and private behavior.

Countries following Islamic Law systems are mostly in the Middle East and it covers 20% of the world’s population.

2) the local laws and regulations that govern the different legal fields that affect business such as contract law, property rights, corporate law, product safety and liability; 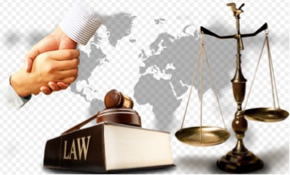 • Finally, before doing any cross-border transaction, it is highly recommended to invest some time in strategically defining how international agreements should be structured, negotiated, and drafted.