A listed company is one in which their shares are listed or quoted on a stock exchange so anyone can buy or sell them.

Annual Report of a Listed Company

A listed company might have as many as 20 different reports plus the accounts themselves and related notes. So they are much longer reports that fall into one of the three following categories:

The accounts are usually described as consolidated. This tells you the company whose accounts you’re looking at owns one or more companies (each of which might own other companies as well).

It’s impossible to expect investors to look at the accounts of each individual company in this family of companies, so the main company (known as the parent) is obliged to produce group accounts or consolidated accounts.

What are Consolidated Accounts?
Essentially one set of accounts that presents the financial picture of the entire group of companies as if it were just one company.

The companies enter into all sorts of transactions that we haven’t encountered before.

Thus, the accounting for some of these transactions can appear and sometimes be quite complex.

Check out this article to see the difference between the two:
http://smallbusiness.chron.com/difference-between-consolidated-individual-company-financial-statements-73171.html
primary statements
Recall that we described the balance sheet as the ‘definitive statement’ of a company’s financial position and the P&L and the cash flow statement as important, but nonetheless merely ‘descriptive statements’.

This means they have to be separate from the notes and given equal prominence in the accounts.

There are also two other primary statements that didn’t appear earlier which we will briefly cover.

1) Profit and Loss (Income Statement) – It can be called the income statement, the profit and loss or the statement of comprehensive income.

– It is described as consolidated: this means it is the P&L of a group of at least two companies.

Example of a Profit and Loss (Income) Statement 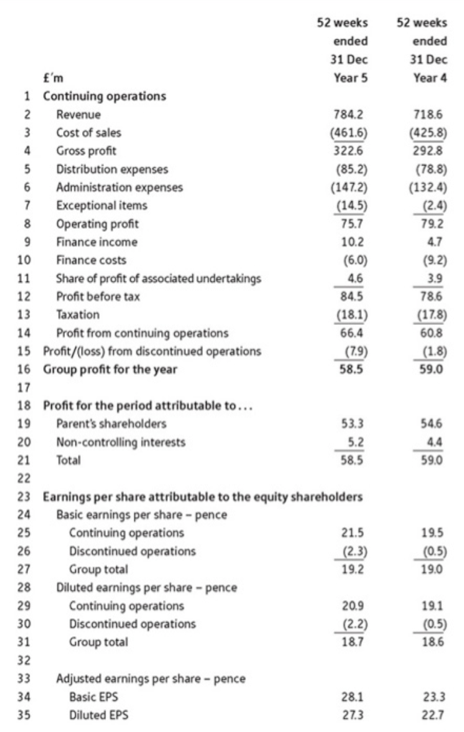 Profit from continuing operations is shown separately from the profit from discontinued operations. This arises where a company has sold or is in the process of selling a meaningful part of its business.

Sometimes, the P& L will have three columns of figures for each year, where column 1 is continuing operations, column 2 is discontinued operations, and column 3 is the total group.

You might also see P&Ls showing adjusted profit, headline profit, underlying profit or something similar. This is where a company believes that presenting its P&L in accordance with accounting rules does not give a useful picture of the underlying performance of the company.

It therefore adjusts the figures as it sees fit to show adjusted profit. In the example above, they have not shown adjusted profit on the P&L at all but have made some adjustments and thus have come up with adjusted earnings per share, which you can see in line 33.

There are some components, which we haven’t covered yet, but we’ll be learning more about them soon.

Example of a Statement of Financial Position 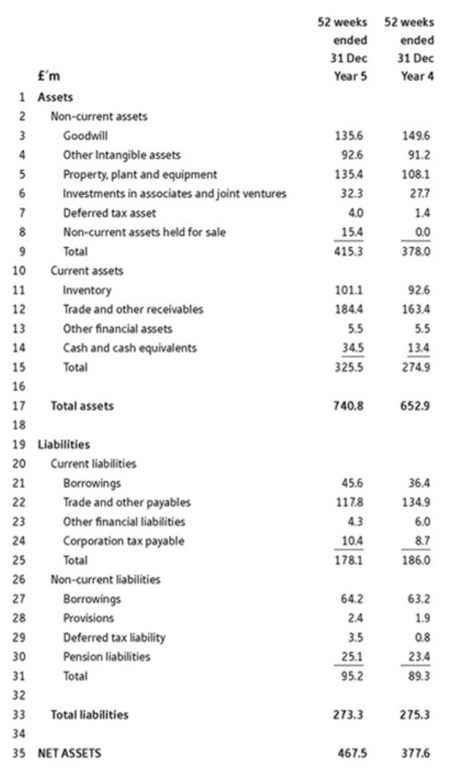 One part that is completely different is the shareholders’ equity section.

When we looked at the balance sheet in the first week, there were three components that made up shareholders’ equity:
· share capital
· share premium
· retained profit

In the example above, we have a heading called Equity, which has two sub-headings:
· shareholders’ equity
· non-controlling interests

Let’s ignore the non-controlling interests for now and come back to this later.

Under shareholders’ equity, we have nine components, which have been divided into two categories:

Note that you won’t see these two categories on a real company’s accounts – we’ve added them in order to help explain things later.
3) Cash Flow Statement

The cash flow statement is similar to what we saw earlier in that it starts with profit and then explains why the cash increase/decrease was different from profit.

However, that there are only three category headings while before we had seen five.

The logic of having just three categories is based on a very simple view of a company’s activities:
· finance the company
· invest the funds raised in various assets
· operate those assets

Sometimes, you will find the details of the operating activities category is in the notes rather than in the actual cash flow statement.