In this lesson, you’re expected to learn:
– why understanding economics is useful
– the difference between microeconomics and macroeconomics
– important concepts such as scarcity, opportunity cost and trade offs

Economics is a study of the ways in which people use resources to satisfy their wants. All of us want the food, clothing, and shelter that we need to stay alive. Our capacity to want is almost unlimited. In contrast, the things we want are always limited in quantity.

Even in wealthy countries, there is never enough of everything to satisfy all the wants of every person in that country. How to narrow this gap between what people want and what they are able to get is the basic problem studied in Economics known as the problem of scarcity.

As human beings we apply our physical strength and intelligence to the resources provided by nature and, the result is something which satisfies human wants. This result is known as goods and services (for example a loaf of bread, a symphony concert, or an airplane). This act of creating something which satisfies human wants or consumption is called production.

Alas! The resources to produce are either not enough or not freely available. Produced goods and services are inevitably limited to satisfy all wants at the same time. Hence, certain choices and decisions have to be made by individuals or groups of individuals in a society:
– what and how much to produce?
– who should produce?
– how this produced good should be divided amongst people
– the consumption of this good or service

These all together make economics a social science. Economists study these dynamic arrangements in a society with the help of economic models and provide information on the best possible allocation of resources and the produced goods and services to meet consumption needs.

Thus, Economics can be defined as the following:

Economics is a social science that deals with the choices and decisions about production, distribution, and consumption of goods and services.

In the late 18th and early 19th century, Mercantilism was the first economic theory and practice in Western Europe. It was a set of policies based on economic nationalism that allowed the government to control the economic life of people in the country and their colonies i.e. how much they should produce, invest and consume etc.

The Mercantilist theory was based on the assumption that there was an inherent and inevitable conflict between the national interest and the selfish interests of the individuals who made up the nation.

The mercantilist policy was to make the state stronger in terms of acquiring wealth and retaining economic activity like the industrial production for a maximum output within its national borders. Wealth in the form of goods, especially gold and silver and other services were accumulated even from the colonies via trade, while the colonies were restricted to trade with other countries.

The basic idea was to make society dependent on state decisions and choices – to not only stimulate domestic production of goods but import cheaper ones from colonies to fulfill the needs of people, while keeping maximum wealth.

Free Market Economy In 1776, Scottish philosopher Adam Smith led the foundation of free or private market economy. Smith, also known as the father of modern economics, gave a rounded account in his famous book ‘The Wealth of Nations’ that an economy’s (country’s) interests are effectively served by permitting each person to make his own decisions and follow his own self-interest in economic life.

Enlarged version of the image: http://bit.ly/2lOBfHn 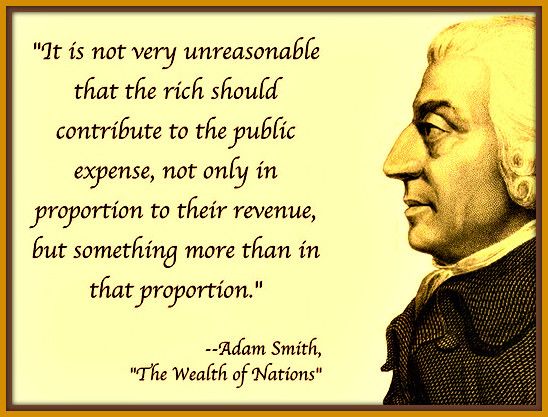 The Concept of The Invisible Hand According to Adam Smith, when individuals are given a choice to freely choose what they want to buy, and the sellers are left to freely decide what they want to sell, the self-interest of both will lead to decisions that result in competitive prices and quality products in the economy and marketplace. Hence, State intervention is not required.

We will explain later in this course, how these pioneering theories play a critical role in today’s businesses and economic system.

Microeconomics is the study of individuals (persons, families, and firms) and how they maximize their welfare, while limited by constraints (financial constraints, resource constraints, time constraints etc.). It focuses on supply and demand, and other factors that determine price level.

For example, Microeconomists may look at what a particular firm does to maximize production while maintaining a low price to better compete in the industry. An increase or decrease in taxation and prices also come under microeconomics.

Macroeconomics deals with the performance, structure, behavior and decision-making of the entire economy, be that a national, regional, or the global economy.

Macroeconomists measure the production of the whole economy as Gross Domestic Product (GDP) and how it is affected by changes in aggregate unemployment, the rate of growth of income levels, and price levels.

For example, inflation trade i.e. imports and exports of a country are macroeconomic factors.

[Optional] The Difference Between Micro and Macro Economics
Read this blog article to learn more:
https://blog.udemy.com/difference-between-micro-and-macro-economics/
Trade-Offs And Opportunity Costs Economics teaches us about the allocation of our scarce resources. There is always a trade-off – whenever we choose to lend, spend or allocate our money, time, assets or energy for one purpose, we lose the opportunity to do all this at the same time for another purpose.