In this lesson, you’re expected to learn:
– the fundamentals of game theory
– the concept of Nash Equilibrium
– how rationality and maximization determine choices

What is Game Theory?

Game theory is the study of strategically interdependent decision making.

It is a way to analyze the interaction between a group of rational individuals who behave strategically.

Interdependence means that any player is affected by what others do and his actions must depend on the prediction of others’ responses. In order for an individual to decide what to do, they must determine how others are going to act. This requires knowledge of other’s aims as well as the options available to them.

It is assumed that players within the game are rational and will strive to maximize their payoffs in the game.

Use of Game Theory

Game theory is a particularly useful tool for understanding why firms and individuals make the decisions they do, and how the decisions made by one individual affects others.

It has also been used to make decisions on price, output, product development, product promotion, and in other business scenarios.

1) Zero Sum Game
When one opponent gains at the loss of the other, involving a complete conflict of interest.

2) Non-Zero Sum Game
Games with less than complete conflict of interest. In these games, the gains of one competitor are not completely at the expense of the other competitors.

[Optional] What exactly is ‘game theory’?
Read this BBC article to learn more:
http://www.bbc.com/news/magazine-31503875
Nash Equilibrium
The Nash Equilibrium was named after renowned mathematician, John Forbes Nash. He developed a structure around how players in a “game” can optimize their outcomes.

In the Nash Equilibrium, each player is assumed to know the equilibrium strategies of the other players, and no player has anything to gain by changing only their own strategy.

Why does the Nash Equilibrium matter? This simple concept helps economists work out how competing companies set their prices, how governments should design auctions to squeeze the most from bidders and how to explain the sometimes self-defeating decisions that groups make.
Key Takeaways

• Technically, a Nash equilibrium is a set of strategies, one for each player, such that no player has incentive to change his or her strategy given what the other players are doing.

• Practically speaking, a Nash equilibrium is a law that no one has incentive to break even in the absence of an effective police force. In a sense, these laws are self-enforcing.

• Following traffic signals is an example of Nash equilibrium at work. When another car is speeding toward you, you do not stop at the red light because a police officer will give you a ticket if you go. You stop because you do not want to die.

Two criminals in separate prison cells face the same offer from the public prosecutor. If they both confess to a murder, they each face ten years in jail. If one stays quiet while the other confesses, then the snitch will get to go free, while the other will face a lifetime in jail. And if both hold their tongue, then they each face a minor charge, and only a year in jail.

Collectively, it would be best for both to keep quiet. But given the set-up, an economist armed with the concept of the Nash equilibrium would predict the opposite: the only stable outcome is for both to confess.

This is a type of business game situation where one firm is concerned about the actions of its rivals.

Prisoner’s Dilemma is a classic conflict-of-interest situation. The outcome of the game cannot be predicted conclusively. 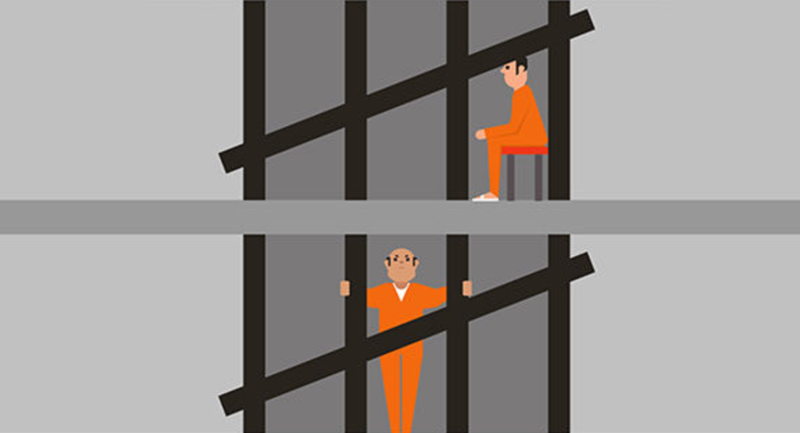 • If a particular strategy is always worse than another for a player, we say that the first strategy is strictly dominated.

• If one strategy is always better than the rest, then the only sensible outcome is for both players to play that strategy.