In this lesson, you’re expected to learn:
– how macroeconomics is related to microeconomics
– the major components and concerns of the macroeconomy
– the aggregate demand and supply model

Macroeconomics describes and explains economic processes that concern aggregates, i.e. it is concerned with the condition of the economy taken as a whole.

In particular, macroeconomics is concerned with the price level and output of the entire economy, and with the total income of all the factors of production in the economy.

Of course, the entire economy consists of the aggregate of all the individual outputs and inputs which are dealt with in microeconomics, and therefore there are close connections between macroeconomics and microeconomics.

However, somewhat different perspectives and methods are required to view matters at the level of the entire economy than when considering individual products and inputs that make up the economy.

The whole is more complex than the sum of independent parts. It is not possible to describe an economy by forming models for all firms and persons and all their cross-effects.

• The macroeconomy affects your well-being.

These are some of the questions that can be answered:

• Why does the cost of living keep rising?
• Why are millions of people unemployed, even when the economy is booming?
• What causes business cycles?
• What is responsible for long-run economic growth?
• Should the exchange rate of a currency be kept at a fixed level?
• Can one decrease unemployment, if one accepts an increase in inflation?
Macroeconomics Concerns

Three of the major concerns of macroeconomics are:

Components of the Macroeconomy
This circular flow diagram shows the income received and payments made by each sector of the economy. 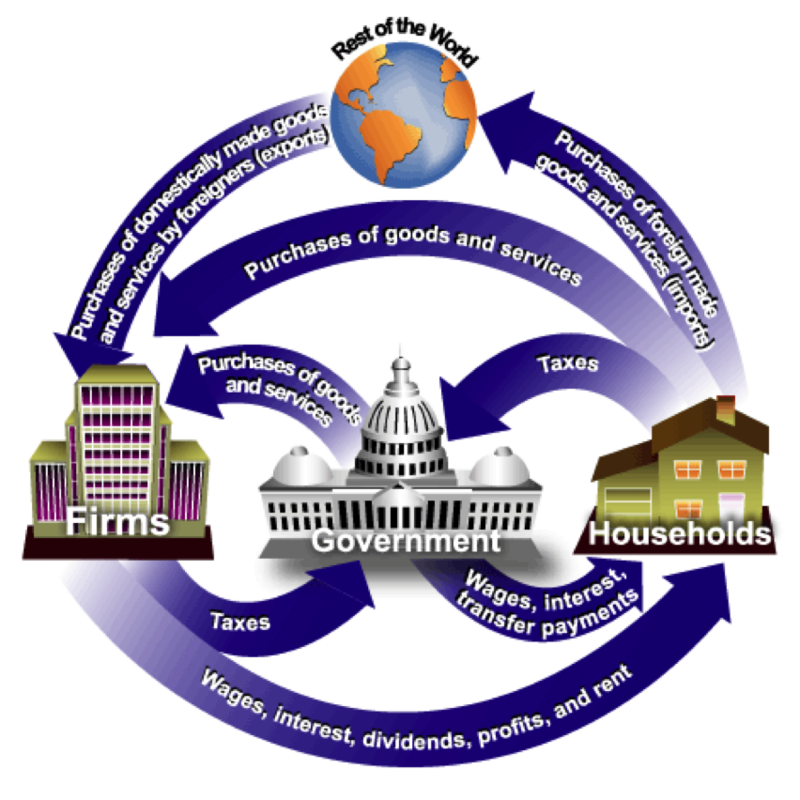 Households, firms, the government, and the rest of the world all interact in three different market arenas:

Households and the government purchase goods and services (demand) from firms in the goods-and-services market, and firms supply to this market.

• In the labor market, firms and government purchase (demand) labor from households (supply).

• The total supply of labor in the economy depends on the sum of decisions made by households.

• In the money market—also called the financial market—households purchase stocks and bonds from firms.

• Households supply funds to this market in the expectation of earning income, and also demand (borrow) funds from this market.

• Firms, government, and the rest of the world also engage in borrowing and lending, coordinated by financial institutions.

• Aggregate Supply is the total supply of goods and services in an economy. 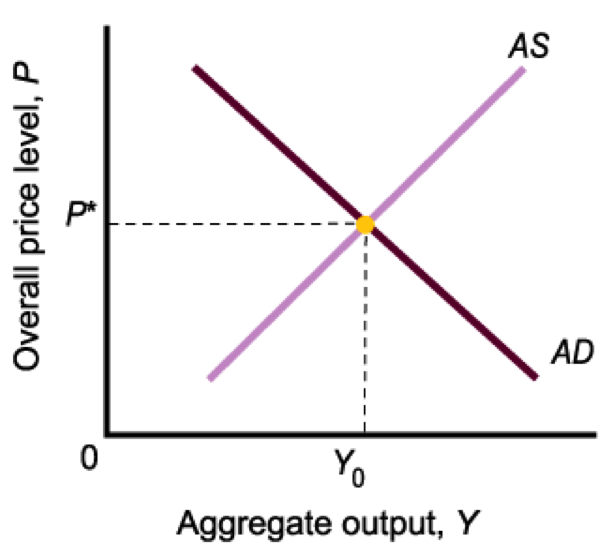 Aggregate Demand Recall that demand is the willingness and ability of consumers to purchase a good or service at various prices in a specific period of time.

Aggregate Demand (AD) is a similar concept, but has some important distinctions.

AD is the demand for all final domestic production in a country. Instead of just households, AD comes from all sectors of the economy. Furthermore, AD relates the price level to the amount of real GDP instead of price to quantity.
Aggregate Supply Aggregate Supply is a much broader concept than supply because it is inclusive of all domestic production, not just a singular good or service.

Like an individual firm, an economy has a production function that relates the amount of labor employed with the amount of output or real GDP that the economy can produce with some fixed level of capital.

• Monetary Policy consists of tools used by the central bank to control the quantity of money in the economy.

• Growth Policies are government policies that focus on stimulating aggregate supply instead of aggregate demand.