In this lesson, you’re expected to:
– learn about sustainable development
– understand how resources should be used to ensure efficiency
– discover how pollution can be controlled in an economy

One of the costs of an ever-increasing economy is the strain that it puts on the environment. As the population expands more and more, resources are required to sustain the population.

This growth need not necessarily lead to environmental collapse. Instead, markets can be used to alter the incentives of individuals and firms as they face trade-offs in their use of resources.

Demand for resources tends to increase the price of those resources. As the price increases, individuals and firms that use these resources face an incentive to use less in the case of non-renewables.

• Most resources are finite and we cannot produce an unlimited number of different goods and services.

• By supplying more for an ever-growing and richer population, we are in danger of destroying the natural resources of the planet.

• Our ecological footprint affects the sustainability of economies and has huge implications for future living standards.

Economics of Sustainable Development The Brundtland Report of 1987 defines sustainable developmentas “development that meets the needs of the present without compromising the ability of future generations to meet their own needs.”

The report describes three mutually dependent, interrelated areas of sustainability: economy, environment, and society. A change in any one area will somehow disturb the other two, thus their effects overlap.

For example, economic growth requires non-renewable natural resources and produces harmful emissions, which affect both the environment and social well-being.

A renewable resource is something of economic value that can be replaced or replenished in the same or less amount of time as it takes to draw the supply down.

Some renewable resources have essentially an endless supply, such as solar, wind, and geothermal energy, while other resources are considered renewable even though some time or effort must go into their renewal, such as wood, oxygen, and fisheries.

Renewable resources are commodities that are inexhaustible or replaceable over time provided that the rate of extraction of the resource is less than the natural rate at which the resource renews itself.

Non-Renewable Resources These are finite resources that cannot be renewed.

In the case of non-renewables like coal, oil, and natural gas, markets provide incentives to both producers and consumers. 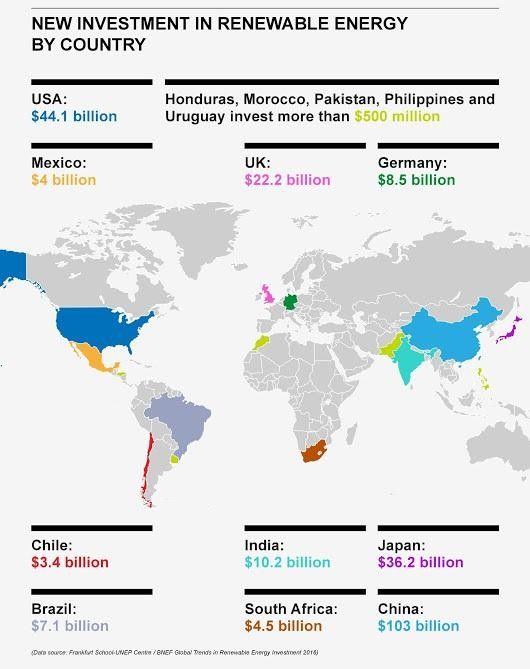 Economic Efficiency Economic efficiency is a state in which resources are allocated optimally so that individuals are served in the best possible way, minimizing inefficiency.

Economic efficiency occurs as resources are used with less waste.

Efficiency should be a goal of not just economists, but anyone who cares about the planet. Less waste means that fewer resources are required in production.

[Optional] Economic Efficiency
Check out this article to learn more:
http://www.economicshelp.org/microessays/costs/efficiency/
The Negative Externality of Pollution
Pollution Control All production processes creates some form of pollution, so zero pollution is not a reasonable goal.

But is there a right amount of pollution?

However, due to the tragedy of the commons*, firms often do not have an incentive to produce the amount of output that is socially optimal.

Governments can tax or sell pollution permits. Another option is for affected individuals who bear the cost of the pollution to negotiate a payment from the polluter.

* Tragedy of the Commons: an economic theory of a situation within a shared-resource system where individual users acting independently according to their own self-interest behave contrary to the common good of all users by depleting or spoiling that resource through their collective action.
[Optional] Tragedy of the Commons
Watch this 6-minute video to learn more: https://www.youtube.com/watch?v=0b2Tl0x-niw
1) Pollution Tax A per-unit tax on the production of a good or service could be used to reduce the amount of pollution that the firm produces. The tax on the producer increases the cost of production, which reduces their willingness and ability to produce their product.

The market outcome is for the price of the good or service to increase and the quantity to decrease. The result is less production, and therefore, less pollution.

The problem with a per-unit tax is that it would most likely be levied on all producers in an industry, which means that cleaner producers are taxed at the same rate as the heavier polluters.

2) Pollution Permits Another option is to create a market for pollution permits. Under a permit scheme, the government establishes a cap on how much of a certain pollutant will be allowed that year. The government would then allocate to an industry the number of permits required to achieve this goal.

Firms and even individuals could buy and sell permits in an exchange. Firms that are relatively clean could sell their unused permits to firms that are heavier polluters. This scheme encourages firms to become more efficient and reduce pollution simultaneously. Unlike a pollution tax, this solution rewards firms for reducing pollution instead of punishing all firms.

Coase Theorem Another alternative for firms that pollute or harm the environment is to directly pay those who are harmed by the pollution.

According to the Coase Theorem, two private parties will be able to bargain with each other and find an efficient solution to an externality problem (without government intervention).

Ronald Coase, a British economist suggested that an efficient outcome could be achieved if polluters and those who bear the cost directly negotiated a payment that was acceptable to both parties.

Some assumptions of this theorem are that there are no bargaining costs for either party, property rights are clearly defined, and the number of people involved is small.

Applying this theorem is a good example of how economic principles can be used to efficiently achieve environmental goals.