If you’re looking for a co-founder and want to expand your team, there are numerous factors to consider.

Do you need a co-founder?

One of the first questions you should ask yourself when starting a business is whether you should go solo or not.

In case you’ve already worked on the project with people, you should make clear what is the commitment of each person:
– Who will work full-time?
– Who will work part-time? How many hours?

Whether you are alone or not, ask yourself: do you need more money, expertise or network ? Are you ready to work with more people, giving up some of your company ownership ?

Reasons for going solo:
– you have enough of what you need (expertise, networks, money) to get off the ground
– you want to retain 100% ownership
– you like to work alone

… but startups with co-founding teams are statistically more successful… even though co-founders’ disputes about roles and compensation is one of the top reasons for failure!
Why?

1) You will go faster
There is usually a lot to be done, and speed of execution is the key strength of startups compared to big companies.

2) You will have more expertise
Sales, Marketing, IT/Programming, Design and many other fields of expertise may be needed. Be humble and try to find the best team from the start.

3) You will have a larger network
… that may help your business take off.

4) You can motivate each other
Starting a business is hard. Very hard. You will need moral support from people other than family and friends who may not understand what exactly you’re doing.

5) It mitigates the risk for investors
Some venture capital funds don’t invest in startups with a solo founder, because of the risk that the vision and culture will not be the same if the solo founder leaves.

The data on the 80 startup unicorns (billion-dollar companies founded since 2000) shows that more than 90% began with a team of two or more. Like the old African proverb says: 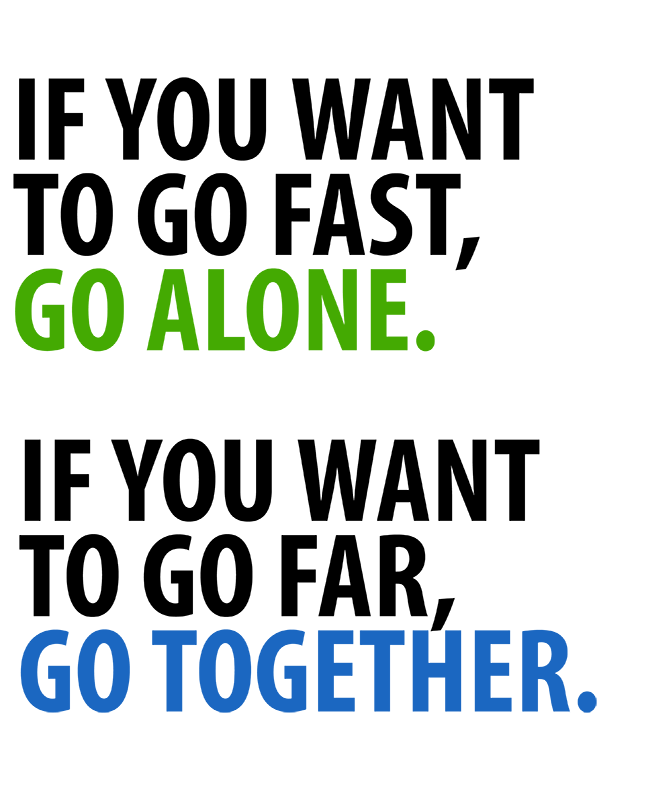 So, what co-founder do you need?

In a few words, a person with an “orthogonal” skill set, which means, as complementary as possible, that shares your vision and passion.

How to build lasting co-founder team?

As we just mentioned, working alongside a co-founder seems to significantly improve your startup’s chances of success but it also poses some risks. Specifically, one of the most common reasons startups fail is co-founder disputes, and those disputes can become a particularly big problem when the co-founder is a friend. Aside from the risk of losing your startup, you may lose a friendship. So, friend or not, if you have a co-founder, make sure that you build a solid base before jumping in.

#1 Start with someone with whom you have a history of working together.

Many entrepreneurs who want to create a startup look for potential co-founders at various founder dating sites and events. But starting a company with someone you don’t know is like getting married to a person you met in a bar last night. Co-founders are not just colleagues; they’re partners who share decisions, a future, potential risks and rewards.

The fact that you have worked together before provides a solid base for open discussion and adjustment to each other’s strengths or weaknesses. Referring to the unicorns data set for support: 90% of the co-founding teams had some history of either working together (60%) or going to school together (46%). The remaining 10% had some common thread; e.g. being introduced by a common friend or an investor.

While the African proverb implies that “going further” is better than quicker, most startups need to do both. As a startup, you’re limited in funds, and with every opportunity in the marketplace that crops up, you see other entrepreneurs ready to take advantage of it sooner than you.

“When we started the company with my co-founder and best friend Tomas, we had similar skill sets. Initially, we thought we would share our decisions and co-manage all aspects of the business together. Yet that turned out to be ineffective because even though we agreed on what needed to be done, we had different views on trivialities that turned out to be slowing us down.

As a result, we decided to divide our roles and give each other the power to make final decisions in our respective areas of responsibility. That decision saved us a lot of time.”

Trusting your co-founder to make his or her decisions is much easier if you’ve already clarified and agreed on your shared vision:

“Tom and I spent an entire week discussing our business vision before we shook hands and incorporated the company together. First, each of us took some time to think about it alone. Then, we shared our unbiased views and discussed them together. We didn’t just stop with the big picture stuff, we discussed things like culture, product, business conduct and relationship dynamics. We then found a common ground and wrote it down in a shared document that forms a part of our founding agreement.”

#4 Set rules and principles to live by

Having a shared vision makes a lot of things easier, but it doesn’t necessarily reduce the risk of personal disputes. Just like in a real relationship with two different personalities, over time one of the partners, for example, may feel that he or she is not listened to or respected enough. If you have known your co-founder for some time, both of you are likely to be aware of your respective weaknesses.

“In our case, just as we did with our vision statement, we discussed our needs and concerns openly without beating around the bush. We shared our concerns about each other’s weaknesses so we could take precautions to avoid them from affecting our startup. We then wrote down the working rules and principles of conduct to get them down in black and white, in case we found ourselves repeating our old mistakes.

I can’t emphasize enough how well this works. For example, one of my worst weaknesses and something Tom has concerns about is that I don’t listen to others as much as I should. As a result of writing things down, we established our responsibility to “talk often and openly, respect and value each other’s views and ideas, find common ground.”

Now, every time one of us feels the other is not listening enough, we can refer back to that piece of the agreement.”

#5 Get mentors and advisors involved

“It’s one thing to write your vision and values down on paper, another to live by that statement day by day. Human beings are fallible, and despite our good intentions, sometimes we’ll find that our weaknesses get the better of us.

To avoid that from happening, we decided to bring on board to our startup a third party: mentors and advisors, to keep us accountable and help in potential disputes.

An experienced and honest mentor not only provides accountability to founders, but also valuable advice and the social proof needed in the eyes of potential partners, investors and customers. When the team at Startup Compass from Stanford analyzed a dataset of 100,000 startups, they found that startups with helpful mentors grew three-and-a-half times faster and raised seven times more money.”

Your co-founder agreement is the last piece in your set of checks and balances. Not having one can be a terrible mistake. If something goes wrong, this piece of paper provides each founder with the comfort of a fair resolution. Like pre-nuptial agreements, they may be the hardest thing to discuss, but if you sense things not going well, you save yourself a lot of frustration.

When signing one, don’t limit yourself to the templates found on the Internet. Instead, invest time in it and leave no stone unturned, because what’s at stake is so important.

Where to find co-founder?

As we mentioned earlier, it’s better if you’ve already worked with your future co-founder. Make a list of people who you would love to work with and who have a complementary skill set and just ask them! If you can’t find one, her are some suggestions:

That’s all for this lesson! Don’t forget to check the additional material with interesting articles, a co-founder equity split calculator to help you, and much more!