In this lesson, you’re expected to learn:
– the difference between Classical and Keynesian economics
– the relevance of the Phillips Curve

Free market economies allow individuals to pursue their own self-interests and rely on the market to focus the use of resources.

1) It helps to understand the functioning of a complicated modern economic system.

3) It helps to bring about stability in price levels and analyzes fluctuations in business activities. It also suggests policy measures to control Inflation.

Government in the Marketplace

Government interaction in markets can include taxes, regulations, and restrictions on using certain resources or engaging in specific activities.

The applications of macroeconomics here may be to determine which government policies help a free market and which do not. Studies on international economies can also help domestic economists discover which portions of a free market may or may not need regulation.

Most economies in the world are mixed, with some government interaction in alleged free markets, making this an important macroeconomic application.

Essentially, there are two theories of employment: Classical and Keynesian.

Classical economists suggest that full employment is the norm of a market economy and that a laissez-faire policy is best.

Keynesian economics holds that unemployment is characteristic of laissez-faire capitalism, and activist government policies are required if one is to avoid the waste of idle resources. These economists believe that full employment is accidental.

Aggregate demand is stable as long as there are no significant changes in the money supply. When aggregate demand declines, the price will fall to eliminate the temporary excess supply and to restore full employment.

One of the assumptions at the heart of classical economic thought is Say’s Law.

French economist Jean-Baptiste Say believed that supply creates its own demand, and as a result, surpluses could not be sustained in a market economy.

[Optional] Understanding Say’s Law
Read this article to learn more:
https://fee.org/articles/understanding-says-law-of-markets/
Keynesian Economics John Maynard Keynes was a classically trained economist who eventually came to the conclusion that the classical assumptions did not describe reality.

Keynes is a polarizing figure in economics. His ideas challenged the status quo, and he is considered by many as the enemy of free-market economics.

Keynesian economists view aggregate demand as unstable and price and wages as downwardly inflexible. A decline in the aggregate demand has no effect on the price level and the real output falls, resulting in unemployment.

Volatility of aggregate demand and downward inflexibility of prices mean that unemployment can persist for extended periods of time. An increase in savings will decrease Gross National Product (GNP).

With a fixed supply of money, higher product price levels increase the demand for money balances, increase the interest rate, and reduce investment.
[Optional] Keynesian vs Classical Models
Read this article to learn more:
http://www.economicshelp.org/keynesian-vs-classical-models-and-policies/
Phillips Curve
The Phillips Curve represents the relationship between the rate of inflation and the unemployment rate.

Economist A. W. Phillips’s study of wage inflation and unemployment in the United Kingdom from 1861 to 1957 is a milestone in the development of macroeconomics. 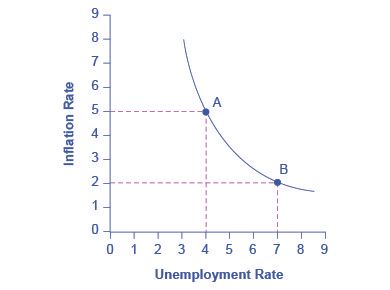 Why is there a trade off between unemployment and inflation? • An increase in aggregate demand (AD to AD2) causes higher real GDP (Y1 to Y2), therefore firms employ more workers and unemployment falls.

• However, as the economy gets closer to full capacity, we see an increase in inflationary pressures.

• With lower unemployment, workers are able to demand higher wages, which causes wage inflation. Also firms can increase prices due to rising demand.

Therefore, in this situation, we see falling unemployment, but higher inflation. 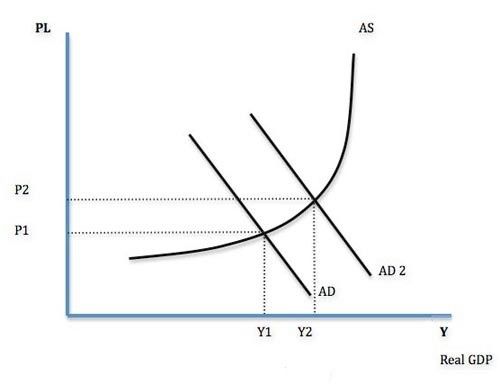 Relevance of Phillips Curve Today In the current economic climate, many Central Banks and policy makers are considering how much importance they should give to reducing unemployment and inflation.

For example, from 2009-13, the Bank of England was willing to tolerate inflation above the government’s target of 2% because they felt to reduce inflation would have caused serious problems for unemployment and economic growth.

This willingness to consider a higher inflation rate, suggests that policy makers feel that the trade off of higher inflation is worth the benefit of lower unemployment. However, not all economists agree with this belief.