Analysis of the Enterprise

In this lesson, you’re expected to learn about:
– return on capital employed
– cost of goods sold
– overheads and other expense ratios

We’re now ready to start looking in depth at a company’s financial performance, starting with the enterprise.

Let’s begin by understanding and analyzing how we calculate the return that an enterprise provides by exploring a concept known as return on capital employed.

ROCE is a long-term profitability ratio because it shows how effectively assets are performing while taking into consideration long-term financing. This is why ROCE is useful ratio to evaluate the longevity of a company.

This ratio is based on two important calculations:
– Operating profit
– Capital employed

1) Net operating profit is often called EBIT or earnings before interest and taxes. EBIT is often reported on the income statement because it shows the company profits generated from operations.

EBIT can also be calculated by adding interest and taxes back into net income if need be.

2) Capital Employed is the amount of capital that is employed in the operation. Thus, it refers to the total assets of a company less all current liabilities.

It is also known as net operating assets.

Return on capital employed is calculated by dividing net operating profit by the employed capital.

For instance, a return of 0.2 indicates that for every dollar invested in capital employed, the company made 20 cents of profits.

Investors are interested in the ratio to see how efficiently a company uses its capital employed as well as its long-term financing strategies.

Companies’ returns should always be higher than the rate at which they are borrowing to fund the assets.

For example, if a company borrows at 10 percent and can only achieve a return of 5 percent, they are losing money.

Check out this article to learn more:
http://accountingexplained.com/financial/ratios/return-on-capital-employed
1) Cost of Goods Sold The cost of goods sold (COGS) is simply the cost of buying and/or making goods to be sold.

To find COGS as a percentage of sales, we can divide this figure by sales. Therefore:

[Optional] Cost of Goods Sold
Read this article to learn more:
http://bit.ly/2uvJrQe
Gross Margin We know that the profit left after subtracting cost of goods sold from sales is known as gross profit. Thus, we can now find gross margin which is the the gross profit as a percentage of sales.

Gross margin and the cost of goods sold effectively tell you the same thing.

Mark-Up Mark-up is the percentage that you add on to your cost to get your selling price.

2) Overheads The other two expenses itemized on a P&L are distribution and administration. We can calculate these as a percentage of sales, just as we did for cost of goods sold.

Let’s first look at distribution. This includes the cost of the sales team as well as the cost of physically transporting the goods to customers.

Along with the expenses itemized on the P&L, the notes to the accounts also provide information which can help to explain why operating profits are behaving as they are.
The table below shows the number of employees in different categories over two years. From this, we can calculate the sales per employee. We can expect that in a well-managed company, sales per employee would rise faster than sales due to improvements in efficiency and technology. 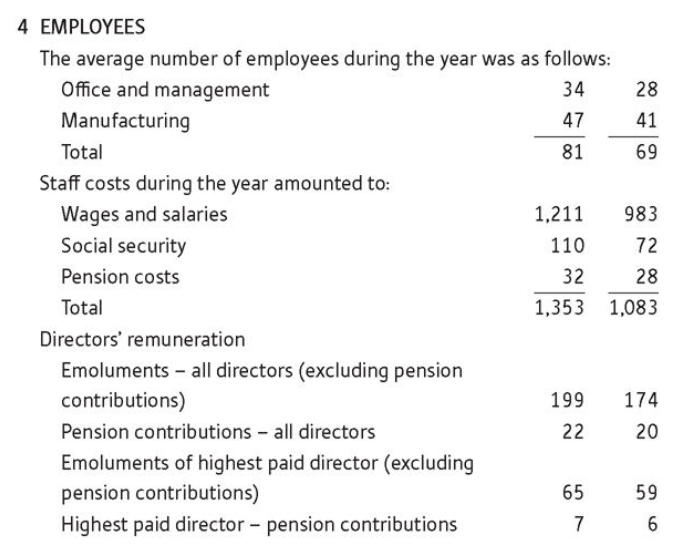